Ways to honor the work of motherhood

‘Just because we do the work of raising children out of love and ... duty doesn’t mean it isn’t real, hard work’

The history of motherhood is integral to the history of women in this country. Recent data from the Pew Research Center shows that 86% of U.S. women ages 40-44 are mothers. Yet honoring motherhood has been relegated to overpriced brunches on one highly commercialized day in May. This only undermines the idea that mothering is important work that has contributed to society via infant health, childhood development and education.

“Just because we do the work of raising children out of love and a sense of duty doesn’t mean that it isn’t real, hard work,” says Ann Crittenden, a Washington-based writer whose book, “The Price of Motherhood,” is considered landmark research on maternal work.

In fact, a recent report by Oxfam calculated that women would have made $10.9 trillion last year if they earned minimum wage for their unpaid work. That includes routine housework, child care, shopping for household items, tending to elderly relatives and other caregiving that is never acknowledged by economists or society. That’s a lot of money.

It’s time to turn the tide. “Everything begins with education. We must see the problem to change the problem,” says Joy Rose, director of the Museum of Motherhood and a mother studies scholar. “If women’s history and caregiving labor become a visible and accessible part of education — in history, economics and liberal studies — then we are assigning value to these individuals by studying their work. Right now we are invisible, performing invisible labor.”

A recent report by Oxfam calculated that women would have made $10.9 trillion last year if they earned minimum wage for their unpaid work. 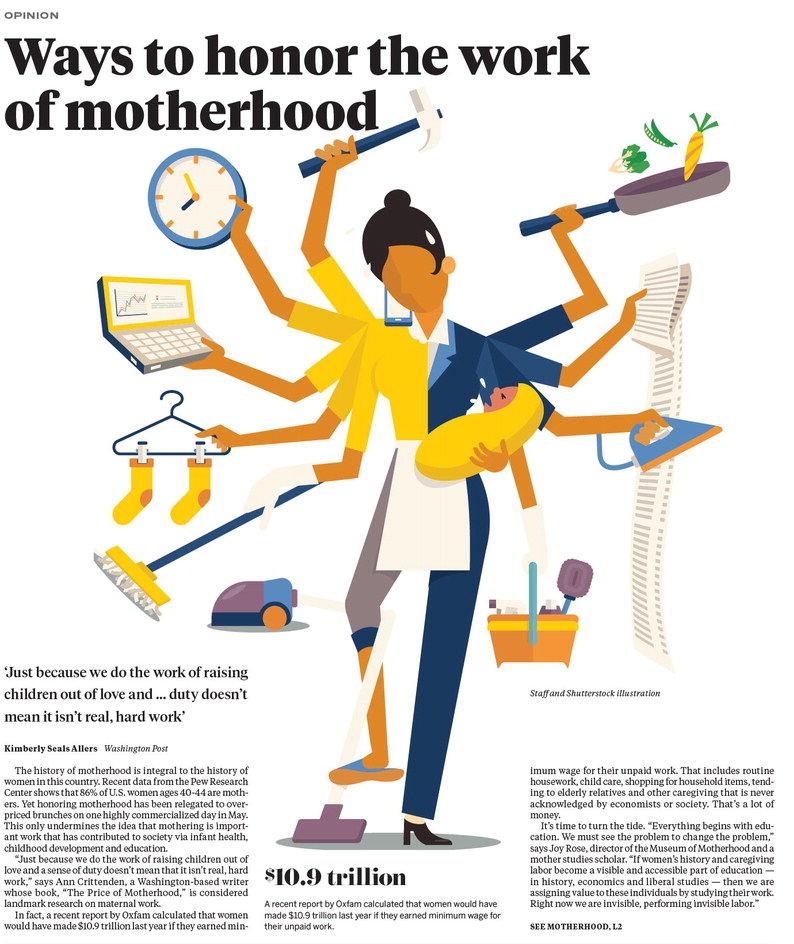 We must begin to see, value and honor the unpaid work women do. Here’s how to get started:

Challenge the system: “We need to reexamine the values assigned to labor and evaluate if our current economic systems — which are rooted in patriarchy and capitalism — actually leave room for valuing things like care work,” says Rose, who also curated the exhibit, “The Founding Mothers: Women in Herstory” at the University of South Florida. “It is clear the current system does not, so our current constructs need more scrutiny, not acceptance.” Instead of accepting the status quo, women can speak up in school board meetings, corporate offices, local politics and on social media, or use creative outlets to advocate for change.

Get woke. Or, at least, well read: For your personal reading list, or if you’re in a book club, Rose suggests including titles that examine motherhood in a historical, racial or cultural context. She specifically recommends “Motherhood and Feminism” by Amber Kinser; “Reproducing Race” by Khiara M. Bridges; “Black Feminist Thought” by Patricia Hill Collins; and “The Price of Motherhood” by Crittenden.

Advocate for policy change: Local and federal policies such as paid family and medical leave, equal pay, affordable child care, free preschool and breast-feeding rights directly impact mothers. Organizations such as MomsRising are actively working on these campaigns, and you can get involved on a city, state or federal level. “One of the best ways to recognize mothering work as real work is to give Social Security credits for that work, which the U.S. still doesn’t do,” Crittenden says.

Talk at home: “We can start on a microlevel, right in our own homes, talking about the ‘value’ of mothers: the work we do, the way we do it, what it’s worth, what are the various kinds of ‘worth,’ etc.,” Rose says. “Share your knowledge within your family structure. Become a hyperlocal activist.”

Make s ocial s afety nets p art o f the larger conversation: Mothers fare better in societies with more social safety nets. “The more society shares the cost of caring for the young, the sick and the elderly, who are a huge percentage of our citizenry — it is fairer for women,” says Crittenden. “This is the work that women have always done for free.” Make sure your own kitchen table and social media discussions of the coming U.S. election include understanding the policy implications for women in general and mothers in particular.

Watch your words: We can a ll improve our language around mothering work. Avoid saying “just a mother” or “only a mother” in describing yourself or others. Breast-feeding is not “free” — it involves a significant time commitment, and a woman’s time has worth. When a new mother has a baby, don’t play into the idea that women are not being “productive” while home caring for their infants. Too many women feel pressured to return to paid work to be valued, and this leads to frustration, a sense of being overwhelmed and, at times, contributes to postpartum depression.

Click here to see this page in the eEdition: